It’s not uncommon to see the words reputation and brand substituted for one another in a manner not dissimilar to the way politicians use the words deficit and debt interchangeably. Like debt and deficit, brand and reputation are linked, but they aren’t the same thing.

By far the best definition of a brand that I’ve heard was given by Interbrand’s Rita Clifton who described a brand as the “organising framework” for an organisation. It is central to an organisation and guides everything from the logo and the colour of the reception sofa, to how its products are developed and the way its employees interact with customers, suppliers and one another. The key point is that an organisation owns its brand – it defines and controls it.

Reputation can be influenced, perceptions can be changed over time, but a company can never actually own its reputation.

Governments across the globe are trying to reduce their budget deficits by reducing spending and increasing revenues. These are the only options available. Governments must set their strategies by deciding what level of spending reduction, revenue increase or both they want to go for. They then need to use all the tactics at their disposal to achieve their deficit reduction targets with minimal pain.

One tactic, used to some success in India, is to make people want to pay more tax.

For the last few years, lists of those who pay the most tax have been compiled in India. It is an imperfect system – tax systems are complicated and many wealthy people pay little in terms of direct taxes, but may pay a lot in other taxes. However, the list is coveted and usually dominated by Bollywood superstars.

For this tactic to work, the value of being seen to pay a lot of tax has to be greater than the value of the tax paid. It’s no surprise then that in India people working in sectors where reputation and public support are important (such as movies) tend to feature in the list.

Last week, Warren Buffett wrote an opinion piece for The New York Times asking the US Government to increase the tax burden on him and his “super-rich” peers. Today, the FT reports that 16 wealthy French individuals have called for an additional tax on the rich as a gesture of national solidarity.

This shows that not only is it possible to make people want to pay more tax, there are already some wealthy people willing to do so.

Recently, Sir Ken Morrison was fined £210,000 by the Financial Services Authority (FSA) for failing to inform the market of share sales in good time. The FT (£) quotes a partner at a city law firm as saying:

“This is a very significant fine for breaches of what some people have regarded as a ‘technical requirement’.”

The fine issued to Sir Ken is not unique. The chart below shows FSA have been handing out more fines since the financial crisis hit. 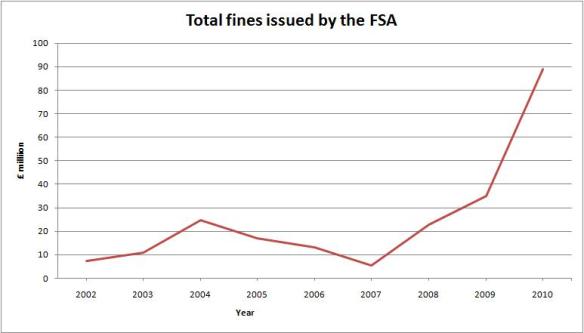 Indeed, the FSA’s records show that last year, they issued £89 million worth of fines compared to £7.4 million in 2002 (the first year for which data are available).

The credit crunch saw calls for financial regulators to be given greater powers. Although some new powers have been granted, it is worth noting that the FSA is also using its existing powers to a much greater extent. This trend is visible in other regulated sectors.

Alastair Buchanan, chief executive of Ofgem, has taken a very confrontational approach to the energy industry. Discussing competition among energy suppliers, The Times (£) quotes him as saying:

“We will pursue breaking up the stranglehold of the Big Six on the electricity market to encourage more firms, like new arrival the Co-op, to enter the energy market and increase the competitive pressure.”

Other examples of regulators flexing muscles include the continued pursuance of BAA in order to further reduce its influence in the airports sector and the Office of Fair Trading’s (OFT) referral of the concrete and aggregates sector to a Competition Commission enquiry.

The upshot of this new, more confrontational style of regulation is that companies are facing more immediate regulatory challenges than previously thought. The days of light touch regulation are over.

The big issue for companies operating in regulated industries is how to deal with regulators who will not only have a greater number of powers but also demonstrate a greater willingness to use them.

Energy suppliers are stopping the practise of doorstep selling, despite the fact that it is effective in winning new customers. Why would an entire industry stop doing something that makes money? To improve its reputation.

In July, Scottish and Southern Energy announced that they would stop the practise (because they were fined for mis-selling) and last week British Gas announced they were suspending doorstep sales for three months because it is ‘increasingly outdated’. That’s two of the big six in the space of a month. It’s likely that the rest will follow in due course.

“It’s not a message that people want to hear. There is not going to be a sudden Damascene moment when everyone understands it. It’s going to be a slower process of education.”

Laidlaw is right, it will be a long hard road. YouGov’s Stephan Shakespeare noted that Scottish Power, the first of the energy companies to announce price rises, had a big drop in its buzz score on YouGov’s BrandIndex tracker when it announced price rises. Notably, the big six all score negatively, even before the latest wave of prices rises. Obviously, putting up prices will always go down badly with consumers, however, domestic energy prices will continue to rise because of the need to invest in cleaner, more efficient ways to generate, supply and use energy.

Energy suppliers are right to focus on listening, engaging and changing business practises where necessary to minimise consumer anger, and mitigate possible legislative and regulatory changes.

I was out in Bushy Park last week and managed to get close enough for this shot without scaring the deer. The one on the left is looking directly at me and is clearly unimpressed.

A cropped version will join the random header images, but I wanted to share it uncropped because I think the houses in the background frame the shot nicely.